Digital warped worlds and the death of truth approximations

It occurred to me somewhat recently that we (that is the royal 'we' or, at very least, I) have been going about this whole thing (whatever it is) terribly wrong. That is, I must beg the question:

"Why in gods name are we trying to approximate 'reality' or the 'truth'?"

I think video games are, in this case, an excellent example. Though things have been changing thanks to the plenitude of indie game companies exploding in the mobile and smaller game scenes, the current plunge of mainstream gaming to ever better approximate reality is bloody absurd. I don't want to imitate what I could go outside and enjoy in a way that is inevitably better. True, the whole "infinite lives" thing is certainly advantageous, but that is, actually, my point exactly. It's not real!!

Thus, I would like to offer a possible idea...
Let's create a first person shooter a la Escher.

Here's a quick picture I drew up in paint (so that one might visualize the strangeness). I will then proceed to explain... 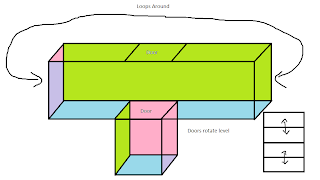 There are basically three ideas being illustrated here. First, and most obviously, the world is like PacMan. When you walk to the end of the hall, you end up back at the beginning. A particularly creative game might be able to capitalize on this idea by making bullets persist and, thus, loop around (i.e., a past bullet becomes a future liability). The game now truly capitalizes on the element of time in this advanced framework (i.e., you are playing against past and future selves).

The second detail is that there are two pathways in the middle of the hall that loop you to opposite ends (i.e., the top might loop to the left entrance and the bottom to the right). However, as I attempted to show with the colours, the loop results in a physical rotation of the playing field. For the characters that move through the entrance (or door as I named it), what was previously the wall is now the floor, and the world rotates accordingly. If the walls and ground all have cover, this adds an additional odd element.

Third, the ceiling of the game is conceptually sandwiched oddly as I attempted to show in the little pic on the bottom right. That is, even though the hall is perceived as straight to the player, if one were to look up they would see down onto a section of the hall that is either behind them or in front of them. Thus, the first section will see down onto the second section and vice versa while the third section will see down onto the fourth section and vice versa, and so on and so forth. This idea is especially interesting when combined with the 'doors,' as when someone steps through the door this property suddenly becomes a part of the walls. I can only imagine what that would look like.

The last thing I would like to say about this idea is that the doors, loops, and ceiling should not be portals. Rather, the graphics, ideally, should fuse into one smooth scene (i.e., the hall looks like it never ends (barring interferences of cover and the repetition of the player(s), the ceilings just look like the next section is stacked upside down above them, and the ground of the doors smoothly fuses with the wall of the front or end of the tunnel).

Now that is an fps for the record books!

An interesting extension of this would be to create game maps with mathematical oddities like Mobius strips, Klein bottles, 4D or higher dimensional cubes, etc. The math for these constructs already exists, hence implementing it in a game should be feasible. Jamming 3D graphics into their context would likely just result in odd things, but that is the point.

If anyone wants any help trying to implement any of these ideas, send me an email. My coding and math skills are not fantastic, but I am always willing to learn and persevere.