Another technicalicality: The pseudo-semantic web and a new hyperlink form

Alright folks, I'm about to introduce a new approach much like the commenting thing.

The idea, here, is to begin better integrating our digital micro worlds with that which is outside. When I state an idea or topic that is either specific or expansive (in that it leads to a plethora of other topics and research), I'm going to create a link that brings you to what I was referring to. The goal is to create a mental web of sorts and support the development of the Semantic web.

Now, this may seem like a daunting task, linking everything to everything, but I'm going to start with simple Google searches of what I'm looking for while narrowing down the idea to what I mean. This brings about a very interesting issue in form.

As soon as I tried to create the first link above, I realized the complexity of such a simple activity... I mean so many things! What is the best way to demonstrate them. Or, more specifically, how the bloody hell does one pick a single page? The implications of that choice are so great. You are going to bolster the importance of that website and potentially set up a dialogue (remember, oh consumers). You are potentially going to forever impact an individuals first encounter with an idea. That is, it's a big responsibility.

To fix this, I first thought that I should only link to Google searches so that the individual might decide. The problem with this is that I'm not benefiting other productive members of the internet nor am I specifically linking in a direct way (i.e., it is too open). Next I thought that Wikipedia could hoard all my links, but that, too, suffered from a similar problem. Following that, it occurred to me that I might be all academic and just link to scholarly papers and original sources, but this was far too constricting.

A light bulb at this point flashed: perhaps the way we link is too old-school. I want a link that explodes me into a framework of ideas that are hierarchically organized (or prioritized) relative to their apparent proximity to the idea. A visual Google search a la graph theory or mental web, but where the author determines the priority of the listing.

This idea is actually reminiscent of some work I had done previously where mental maps are illustrated in the framework of dynamic systems through the use of attractor basins.

Here's an image I stole from a (sort of) paper I wrote for an independent study. 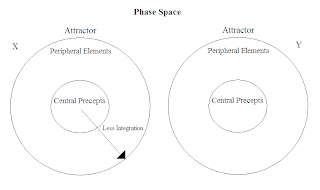 Though I could riff on this topic forever (foreshadowing?), I will continue.

What I realized was that, until such a search should be created, I am going to have to find another means. My temporary solution was to create reference numbers of links after each point (e.g., (1 2 3)) and make them hierarchically organized. Though, I may still implement this, given that I currently explained that the first link is the most relevant, I initially had a problem: by creating multiple links I make the task of further researching appear more daunting and thus perturb people in such a way that they are potentially less likely to follow the links! Multiplicity is simultaneously dispersion.

In conclusion, for the most part, I have decided to create links to the best possible option (with possible occasional implementations of the best few options when I deem the time appropriate). On the basis of whatever wisdom I have combined with sheer impulsivity, I will choose just one.

May you forever enjoy the never ending web of relations that is the internet of the future now.