Absolute, Bloody, Terror: A 'Poem' for 'The New Aesthetic'

Pseudo-Abstract:
There is no abstract for this piece as I consider it to be a poem of sorts.

Important Links:
Will Wiles' piece The machine gaze or a working familiarity with The New Aesthetic is crucial.


After skimming through GetPrismatic, an elegant filter-by-content for blogs, and finding Will Wiles' piece on 'The New Aesthetic,' I came to the not so odd conclusion that I had something to contribute to this behemoth of a topic, now well rampant in the sewers of the digital sphere. How and why I came to that conclusion--given the utter absence of research I have done on the topic--is perhaps simply indicative of what Wiles' and James Bridle are describing: a growing 21st century condition or sense of self. Or, perhaps more poignantly, a self that is 'awakening,' within the implicit neon glow, to its complete and utter lack of identity. Thus, when Bridle describes his search for the "edges" of this amorphous, budding entity that is 'The New Aesthetic,' what becomes apparent is not a thing or some thing. Rather, what becomes apparent is the utter absence of a thing--the Void.

If this sounds implicitly religious, let us make it explicit. It is religious. As the French philosopher Quentin Meillassoux beautifully argued in After Finitude, "by forbidding reason any claim to the absolute, the end of metaphysics has taken the form of an exacerbated return of the religious." Again, from the same text:


Contrary to the familiar view according to which Occidental modernity consists in a vast enterprise of the secularization of thought, we consider the most striking feature of modernity to be the following: the modern man is he who has been re-ligionized precisely to the extent that he has been de-Christianized. The modern man is he who, even as he stripped Christianity of the ideological (metaphysical) pretension that its belief system was superior to all others, has delivered himself body and soul to the idea that all belief systems are equally legitimate in matters of veracity. 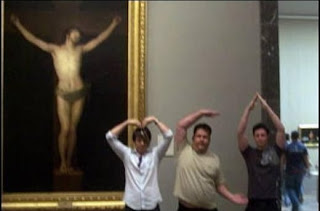 And, the positive and negative hype that has swirled around 'The New Aesthetic' does speak to a particular religious tinge. And, the fact that the monstrosity that graces the top of this 'page,' so many wasted polymers, might be considered art is indicative of the lack of reference for evaluation. Whether this is Good or Bad is for someone else to decide. What is of interest to me here is the human tendency to grasp for... something... What is evident in this grasping is the lack that inspired it. And, I am not speaking to a mere Existentialism resurfaced. No. I am speaking to a state in which Existentialism is so pervasive that it has become the ground on which we walk. We assume Existentialism in the process of forgetting that assumption. Then we drown ourselves in powerful technologies that we build but cannot understand.

In the sea of ever-increasing Ghz, amidst the glow of smartphone screens, beneath the whir of digitized spectacles, within the warmth of humming server farms, [while worldCanStillSupportPopulation == True: population = population + 1] people are beginning to notice their mediated experience. And they grasp for 'The New Aesthetic' or similar totems in the hopes that their behaviour might be justified. That it might all make sense is the dire need of untold billions, sucker-punched by the banality of the seething, techno-organic stew.

But the hope is wrong, founded on good intentions. The bliss that is felt in the fleeting glimpses of this 'new thing,' is actually much more terrible than anyone could ever imagine: traumatic. It is the realization that the system, our system, is broken. When planes glitch through Google maps, stock trading algorithms crash the market, and people create 8-bit graphics in the 'real world,' that's a breakdown. It's a gap or hole in the system. It's the Void: absolute, bloody, terror.

But, insanity compared to what or whom. Is an insane person insane lacking a point of reference for sanity, as the proverb goes. Perhaps that's the point.

I think I will close with a long quote from Reza Negarestani's On the Revolutionary Earth, which will probably be more confusing than enlightening as Reza is wont to be.

Translation:
Opposing the system supports its use of isolation.


On the contrary, the obligation of the revolutionary subject is to absorb and interiorize traumas so as to expose ‘isolated traumas’ (this or that regional world), interconnect them to its regional horizon and widen them across the geocosmic continuum and deep into the cosmic exteriority [i.e., the Void].

Translation:
Revolution embraces the pain (trauma) of the human condition of techno-insanity and unites all in its ubiquity.


Modern man is a surgeon who does not amputate himself from the worlds of capitalism and religion. Instead, he transplants himself and these worlds inside each other in order to reconnect his actual regional horizon (cohabited with capitalism and fundamentalism) once again to the freedom of absolute depths.

Translation:
To share with the 'enemy' brings freedom through terror.


To this end, the revolution on the geocosmic continuum that is the revolution rekindled out of the Copernican commune should not be paved on the politicophilosophical corpus of those who impose on us wanton discrepancies and excesses of the earthly life but those who delude us with the axiomatic verity of ourselves and reform the ground of the terrestrial thought in one way or another.