Pseudo-Abstract:
I discuss how the new virtual reality headset, Oculus Rift, is indicative of a growing shift away from materiality: the 'real,' 'physical' world we all supposedly know and love (1, 2). By highlighting three other phenomena that are similarly indicative--unboxing, phantom limbs, and lucid dreams--I attempt to forecast a method to extend this visual work in VR into the realm of 'physical' sensation. This new method, however, attempts to push the boundaries of our technological conceptions by abandoning the contemporary bias of physicality. That is, we no longer live in a world where you need wires and cables to be 'plugged in.' This is what it means to be 'Softwired.'

The solution, then, is to harness this state and use it to trick the mind into 'feeling' VR. That is, with the powerful symbolic gratification demonstrated by the unboxing phenomena; the easy plasticity and extension of the mind outside of itself indicated in Ramachandran's work with mirrors and phantom limbs; and, the interface provided through the body's natural associations with dream states and awakening, one gets an interesting 'softwire' implementation. It may be possible to displace one's sense of self onto the virtual representation, and hence trick the mind to feel what the representation is feeling, by imitating the 'waking up' experience upon entering VR. Sensory deprivation tank not included.

Given that the Oculus Rift is only a few days old, a marvel in itself considering the endorsement it has already received, it is probably strange to be hearing "post" already. However, this is the case. The ever accelerating expansion in tech and VR can only forecast future states, almost by definition. And, immediately after reading about this incredible technology, it was inevitable to start thinking about how one could extend this to physical sensation (i.e., touch). With technology like Microsoft's Kinect 2 and Leap fast approaching, this may be the last piece to a nearly unlimited virtual experience. Yet, the traditional way to work with and think about technology may be the wrong way to approach this problem. By binding theory to physicality, one limits many potential innovative solutions. Unfortunately, this seems to be the 'natural' way of thinking.

When one pictures 'technology,' the inclination is to think of wires or some form of hardware. A Google images search for "technology" corroborates this to a certain degree. Even the dystopian anticipations of 'possible futures' are often trapped in this kind of view, as Neo's awakening out of the Matrix--a giant, material machine--illustrates. But, this vision is no longer indicative of the current or probable future state of affairs. Humanity's predictive capacity in the West is backlogged circa 1950. Hence, it is not surprising that the contemporary technological space has largely passed us by. We are still waiting for the wires. In the mean time, the entire world has been swallowed by a diffuse matrix of invisible information and it is already so pervasive that its identification is extremely difficult. Like a fish in water, humanity breathes technology without even realizing it. 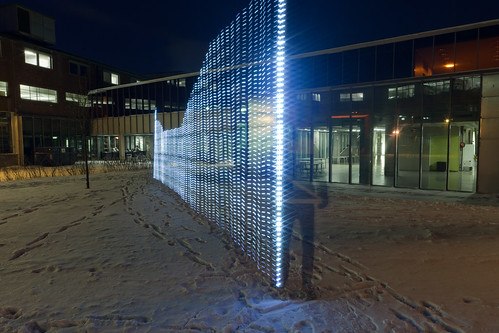 An excellent illustration of this was performed by Timo Arnall, Jorn Knutsen, and Einar Sneve Martinussen in a brilliant art-slash-data-visualization piece entitled Light painting WiFi. The authors basically created an abstract 'measuring stick' for WiFi signal strength and then marched around urban areas with some artistic stuff thrown in (e.g., camera tricks, etc.). What was created as a result is a pseudo-materialization of an "immaterial" as Matt Jones likes to call it. That is, the piece offers a very simple material conceptualization qua visualization of the digital immersion of the Western world. Yet, the fact that this visualization is not an intimate part of the global awareness, hence its relevance at this time, is only a further indicator of the degree of the problem. WiFi is, realistically, a 'low hanging fruit.'  It rides the cusp of our technological immersion: the signals are diffuse and invisible but still very intimately related to hardware. The "filter bubble," in contrast, is much more subtle and far more indirectly related to materiality. The fact that the entire world is currently driven by a stock market, 70% of which is run by machines (1, 2) whose actions are incomprehensible, is of a similar caliber (see Kevin Slavin's Ted talk or my previous post for a more detailed discussion of this topic).

In fact, it is the opposite of Jones' description: immateriality is shaping materiality. The high frequency trading that is running the stock market right now is already terraforming the planet (1, 2, 3). The effort to make this 'immaterial' reality more material a la Jones is outdated. What is needed is an entirely new way of framing humanity's relation to the 'world,' a world that is increasingly incomprehensible in older forms of knowing. Without this, the uncritical assimilation of fascinating tools like the Oculus Rift is likely to cause serious downstream problems. At minimum, the characterization of phenomena like unboxing is very challenging in common frameworks.

Unboxing is a fascinating phenomena where marketing, capitalism, or perhaps Christmas is taken to pornographic proportions. People film themselves opening new, usually technological, items so that others might participate in the pleasure of that first moment. Despite the apparent absurdity of indulging in another individual's new toy, unboxing has gone viral. Youtube, by way of example, has some unboxing videos with over a million hits and there are websites dedicated specifically to the topic. Yet, to frame this assemblage of behaviours as pornography or some form of ritualized, symbolic gratification does not lend itself to an explanation of the phenomena. At best it just describes what is currently happening: a non-material 'thing' invokes a similar response to the thing itself due to some previous association. At worst it misses the point entirely: it requires reference to the previous material relation in order to have any effect or comprehension of the situation; it lacks a direct means of approach. And, let us be honest, pornography, of any kind, does not require an initial experience of the phenomena in question in order to be utilized. Hence, this material dependency is not useful. Instead, what is needed is various methods to approach a variety of experiences directly. Ramachandran's work with mirrors is one such method for this highly 'symbolic' space.

Ramachandran either discovered or popularized the idea of using mirrors to treat the symptoms many people experience after amputation, the phantom limb. In essence, these individuals still feel various sensations, often unpleasant, where their arm, leg, or other body part was once present. Upon exposure to a mirror in such a way that the mind can mistakenly perceive the remaining limb as the one that is missing, and then 'moving' both the phantom and 'real' limb in sync, these symptoms rapidly disappear. That is, the patient stops feeling a pain with no physical basis through a method with no physical basis. 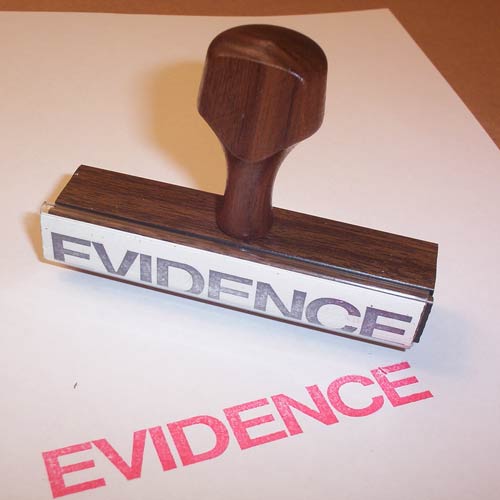 Now, many people will challenge this last claim as untenable given the current evidence. They will make claims for a physical basis in the arm that was amputated, the brain, or the light particles that make up the image. I agree, but that is not the point. The existence of materialism as a tenable philosophical or conceptual position is evidence enough that any set of circumstances can be described materially. Idealism, pragmatism, and any number of other positions might just as well be argued; though, materialism is certainly dominant in Western Science--reification intentional. The question is whether or not any or all of these differentiations are conducive to discovering direct methods that lead to solutions like the mirror for phantom limbs. What I was trying to illustrate, to put into question, was the materiality of the solutions used by Ramachandran. The idea of "opening your missing hand" is very strange if viewed materially and far less direct (e.g., when using the brain). More importantly, the very idea of using a mirror in this fashion seems highly unlikely in many of these contexts. The fact that Ramachandran's culture of origin does not have the same material biases that are prominent in the West cannot be ignored. Thus, I propose we abandon all such limiting factors. In their place, I propose unadulterated, conceptual expansion. The new motto: try everything. By definition, you will only keep the 'things' and follow the paths that work. Success is inevitable until humanity is extinct. Accepting this, even tentatively, it is possible to follow the greater implications of both unboxing and the mirror. 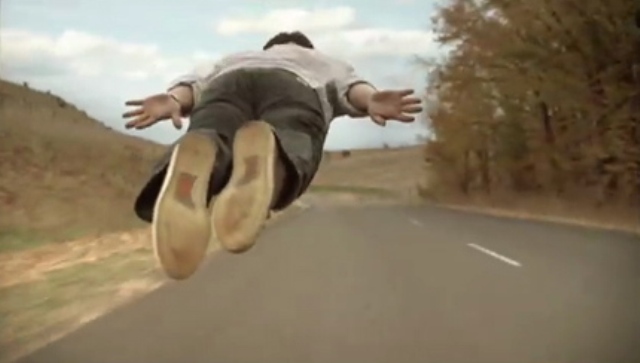 The implication of both of these phenomena is a new characterization of the world. I choose to illustrate this world through the idea of lucid dreaming: the experience of being 'awake' while maintaining the dreaming state. It is not lucid dreaming nor is it just a dream. Lucid dreaming merely characterizes some of the aspects of this new world that are relevant to the current discussion. Specifically, it has a quality of concreteness and experiential validity while simultaneously having an extreme degree of flexibility. Most importantly, it is very close to a simulated world like VR and I can feel in it. Thus, for these reasons it offers an elegant approximation or metaphor whose implications are likely worth exploring. I say "likely" because ultimate success is unknowable and absurd, while local success is guaranteed given that I was motivated enough to put 'pen to paper.'

The implication I want to emphasize is the experience of waking up. When one is lucid dreaming, or dreaming more generally, what will often occur is a "false awakening," where the individual feels as though they have resumed a regular, waking state when they are in fact still dreaming. What is fascinating about this occurrence is that the process of 'waking up' is powerful enough to annihilate the flexibility of a dreaming state and resume a vivid sense of concreteness: the person truly believes they have awoken. Oddly, this is a sort of half-way point between lucid dreaming and dreaming proper. Thus, the implication is as follows. If, by some means, one could emulate this experience--perhaps by actually falling asleep and arising in VR--it may be possible to trick the mind as Ramachandran did and extend one's perception of sensation into the virtual form. In fact, it is possible that, given the circumstances of this shift, the mind might even enhance the virtual image in order to accommodate the increase in concreteness and validity. That is, if I believe its 'real,' it must be more 'real.'

Welcome to the softwire. Please enjoy your stay.